Quiche Me You Fool 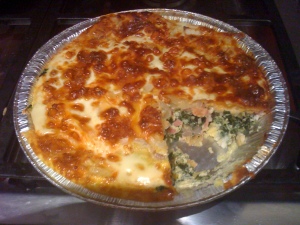 Hallelujah! Life is good. Just stepped on the scale after a weekend of non stop eating and drinking and shockingly lost weight

I started off the weekend by baking two crustless Quiches. Unbeknownst to me, the traditional french dish “Quiche” actually originated in Germany. During medieval times, Germany ruled over the kingdom of Lothringen (renamed Lorraine). The German word for cake is “kuchen”. Thus when France got its kingdom back, Quiche Lorraine was born.

I started eating Quiche very young when my mother, trying to be “tres” fancy, would bring these fragrant pies home from Bloomingdale’s. Thinking we were eating some exotic french import, we would heat these cheese laden pies in the oven until hot and gooey and consume with a side salad. Ohh laa laa.

Maybe because they are shaped like pies or maybe because it has a funny french name but Quiche became an object of ridicule when in 1982, Bruce Feirstein wrote the satirical tongue in cheek bestseller, “Real Men Dont Eat Quiche”. This book, “A Guidebook to all That is Truly Masculine”, describes quiche-eaters as over-anxious trend chasers, conformists or just men who are “whipped” and quite “femme”.

Needless to say, men everywhere stopped eating Quiche lest be mistaken for being the dreaded “Quiche eaters”.

That’s too bad because Quiche is hardly “femme-food”. I like making my Quiche with lots of crispy bacon, spinach, some chopped onions and fists full of cheese. Bake until firm, hot and bubbly and Voila! Easy as pie.

I first made Quiche when I was making a video in my cinema class back in college. I wanted to show how quick and easy it was to bake a Quiche. I performed my preparations in front of the camera to the 1960’s famous classic surfer song, “Wipe Out”. Unfortunately I underestimated the speed of that song for the preparation of the Quiche and the video turned out truly to be a wipe out. As I struggled to keep pace with the songs beat, I ended up literally throwing the ingredients across the table into the bowl, eggshells and all. As I did not have a chance to pick out all of the shells I simply hid them amongst the layers of cheese and bacon. Even though my career as a video chef was ultimately abandoned, my Quiche surprisingly turned out fantastic and was quickly devoured by my camera crew, eggshells and all.

I used to bake my Quiche with store-bought frozen pie crust, however as I am on the “I Love Food Diet”, I simply omitted the pastry crust and just used the aluminum pie pan. With enough bacon, cheese and spinach. the crust was barely missed. I ate the crustless Quiche with a side salad and a 1/2 bottle of wine and was feeling “tres” fancy.

Should you be so inclined to make a crustless Quiche yourself, please find my recipe below.

Layer spinach, bacon, onion and cheeses on top of each other in pie pan. I like to put the spinach on the bottom but you can do whatever you want. Pour egg/milk mixture on top. Bake in preheated oven at 375 degrees for approximately 45 minutes or until firm. You can test if it is done by inserting a toothpick in the center. If if comes out clean, its done. Thats it.

Real Men may not eat Quiche but smart and hungry ones do.