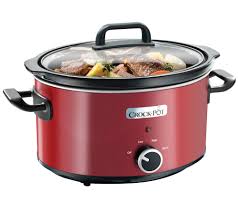 Never one to give up, I have decided to take another stab at “crock pottery” and master the behemoth sitting on top of my counter top.

As today is officially Day 1 of me getting back on the I LOVE FOOD DIET wagon, I decided I needed to make some good and tasty low carb meat for dinner. After 2 weeks of eating every carb in sight, I have officially gained back 5 lbs of the 10 lbs lost this past 6 weeks. Although this is slightly alarming news, please don’t feel sorry for me. I fully deserve to gain some weight as I have stuffed myself with bagels, rice, pasta, and Zeppoles with abandon ever since my fall from grace at the San Gennero’s food festival 2 weeks ago. Now that the festival is FINALLY over, I am good and ready to start “low-carbing” it and am actually looking forward to some good old-fashioned protein.

I wandered the aisle of the meat department waiting for inspiration. That inspiration came in the way of the “sale” sign. The Food Emporium was having a sale on “Boneless Shoulder Roast – Premium Angus”. As you all know, I love a good bargain so – shoulder roast it was. Never mind that I have NO IDEA what a “boneless shoulder roast” was or have the faintest idea of how to cook it. It was on sale and that it that.

I carried my roast home protectively as I would cradle a baby. It was pouring out and I did not want my “baby” to get wet. I looked up recipes on-line but first had to figure out exactly what I was cooking.

Just then, my mother (the queen of the crock pot) happened to call. When I told her I making a “shoulder roast”, she immediately said, “Oh, pork roast. I love pork roast”. I double checked the label that was now sitting in the garbage just to verify. “I think it’s a beef shoulder”, I said, “The label says Angus and Angus is usually cow – right?”

My mother than said with a touch of disappointment, “Oh, its beef. Well you better get cooking because that is going to take a long time to cook”. ” Make, sure you set the setting on high” she added.

I looked at the clock. It was already 1:00pm. Would 7 hours be enough for this slow cooker to cook?

It seems that the general consensus is that braising (cooking the meat in a small amount of liquid in a closed container for a LONG time) is the best method to cook this particular cut of meat. The primary goal is to cook that baby until the collegen in the connective tissue melts thereby transforming the tough piece of leather into a tender delicious roast.

I scanned the recipes on-line. I pan seared the meat first to seal in the juices before I placed the meat in the pot. I added 1 large onion, 2 carrots, 4 cloves of garlic 2 stalks of celery and a generous heaping of salt and pepper. I de-glazed (added 1 cup of water and scraping the pan drippings)  of the pot that I had used for the searing of the meat, added a small cube of beef bouillon and 1 tablespoon of tomato paste to make a nice broth. I poured the broth over the meat in the cooker and pushed the button to start.

I waited and waited. The kids came home from school and by 6:00 were famished. Luckily my husband surprised us all and brought home burgers and fries from Jackson Hole – the burger joint famous for their mammoth sized burgers. When he took one look at the slow cooker cooking, he groaned and said, “Not again? I am not going near that thing.” He then proceeded to complain about the dangers of the crock pot and re- showed me his “war wound” – the still visible burn scar from his last encounter with the slow cooker.  I assured him that this time he need not go near it and I would serve him.

After 6 hours I timidly tried the roast. It was good but not great. The meat was still slightly tough and chewy. I added another 2 hours to the timer and waited some more.

At about 9:00pm, famished and deliroius from hunger, I finally tried the shoulder roast and you know what…..it was delicious. The tough chewy meat transformed into a soft, tender, tasty and low carb meal. This crocker is a keeper!  Just make sure you have PLENTY of time for your slow cooker to cook.