In Pursuit of My Balls 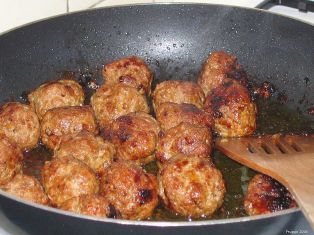 I have to apologize to the  readers who have been  kind enough to bestow upon me a few moments in their day to peruse my blog. Since late last week, I have been extremely pre-occupied. The reason being is that I received some unfavorable comments on my blog last week and those few comments threw me for a loop.

What started out as a simple hobby has become a major part of my life. I had no idea that the I LOVE FOOD DIET would grow and reach as many people as it has. I assumed that the daily visits to my site were from family and friends however, it seems that REAL people have been actually paying attention and even going so far as to COMMENT!

Instead of basking in the glory of my “minor success”, and focusing on the positive aspects of reaching a “real” audience, all I was doing was focusing on those negative comments and commenters.

I began questioning myself on everything that I put down on paper. Instead of my “off the cuff” style and occasional rambling that personalized my blog, I began hesitating and re-thinking everything that I wrote. I would start, stop and erase over and over again trying to appeal to all.

I  second guessed myself on everything that I wrote and ultimately wrote nothing at all these past few days. Where I used to jump out of bed at the crack of dawn eager to write, I suddenly felt stifled and un-inspired. Many friends have tried to help me with my “bloggers-block” offering me ideas, recipes and suggestions. And although I greatly appreciate all the suggestions and their very kind support, ultimately I needed to re-find my own voice which is something I find hard to do with other people’s ideas.

Sooooo, after much wrestling back and forth, I figured that a “flawed” blog is better than “no-blog” and have decided to shelve the negative commenters and focus on me, my body and the I LOVE FOOD DIET.

I found inspiration at my lunch today with a dear friend of mine. She has been recently following the I LOVE FOOD DIET and has successfully lost weight. She graciously suggested that we  enjoy a “high fat-low carb” meal together.

I suggested that we  check out the new offshoot of the very popular Bar Stuzzichini in the Flatiron district. This offshoot in my TriBeCa nabe is a smaller version called Stuzzicheria. At lunchtime, they offer a “mix and match” lunch where for a mere $16.00 you have your choice of 3 small plates of delicious homemade Italian dishes.

I quickly scanned the menu and ordered the 3 least carb filled items. I had the grilled octopus, the cured pork and 5 small meatballs. As we were both avoiding carbs, we passed on the crusty italian bread with extra virgin olive oil dipping.

Those five tiny meatballs were deeeliiiiiiccccious!

This got me thinking. I need MORE balls.

Meatballs have made a serious comeback in recent years. Several restaurants in New York City have jumped on the  meatball bandwagon serving up their own unique versions of the ubiquitous ball. The Meatball Shop on Stanton Street in the Lower East Side has been churning out thousands of tasty meatballs a day since its opening earlier this year. Locande Verde offers their own delicious nouveau itailien version

And no wonder?  – who doesnt love a Meatball? Meatballs are like ball-shaped hamburgers – only better. Whereas the lowly burger is often simply flavored with salt and pepper, meatballs are often home-made with unique combinations of eggs, breadcrumbs, garlic, chopped onion, seasoning and spices. Meatballs are more like meatloaf (another fave!) than a burger.

I quickly ran to the Food Emporium and stocked up on some supplies.  I plan on test driving a few versions tonight. Will report my findings tomorrow.