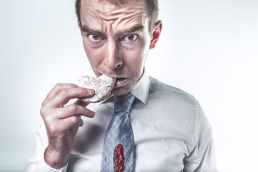 This political climate is making me nuts. Whatever your opinion about the current President, (and isn’t it great that in this country you are FREE to have and express any opinion you want?), you can’t deny that this “sh**-hole” is CRAZY!!!! Every day is “Breaking News” and not the good kind.

It’s enough to drive anyone to EAT! When I googled, “what is comfort food”, the following came up:

com·fort food
ˈkəmfərt fo͞od/
noun
My idea of “comfort food” is slightly different from the above definition. In my mind, comfort food is more high-fat than high-sugar/carb. I much rather find solace in a big fat cheeseburger (hold the bun) or fried chicken (coated in spices instead of breadcrumbs) rather than cookies or cake. Cozying up with a luscious cheese fondue (using veggies instead of bread for dipping) would improve my mood a lot quicker than a inhaling a dozen donuts in my car.
Soaking my sorrows in a one or two vodka martinis is much preferable than guzzling super sweet, sugar-laden frozen margaritas.
It could be that my childhood was different from other kids. I was a latch-key kid growing up. My parents owned a restaurant and worked until late at night. I was left on my own at a very young age. When I would come home from school, my mom always left me a very large snack to eat until they came home around 9:00pm. At that point we had dinner which usually was composed of some sort of meat/seafood and vegetables. Dessert was fresh fruit.
I ate what they ate. And they favored savory over sweet. We rarely had cookies or cakes in the house. Throughout my adolescence, home cooking was soups, stews, broiled meats, grilled fish and sautéed veggies. That’s not to say that we never ate carbs and sweets, it’s just that it wasn’t that often.
Our friends at Wikipedia write;  the term comfort food has been traced back at least to 1966, when the Palm Beach Post used it in a story: “Adults, when under severe emotional stress, turn to what could be called ‘comfort food’—food associated with the security of childhood, like mother’s poached egg or famous chicken soup.”[4] They are believed to be a great coping mechanism for rapidly soothing negative feelings.”

Hmm… I understand how chicken soup can be comforting but poached eggs??? Actually poached eggs are low in calories, very filling, a great source of protein and have zero carbs.

In these crazy times I think many of us need comfort food. I’m going to poach some eggs now. I suggest you do too!